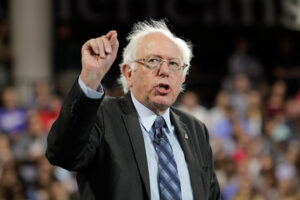 With much of the Democrat party’s political establishment in Nevada behind Biden, except for a few major exceptions, the Culinary Union and Former Sen. Harry Reid, Sanders still leads the pack with a solid 25% of the vote going into the Caucus. Biden trails with 18%.

But this is no surprise to those of us watching the Nevada Dem party for the last 4 years lurch to the far left. Nevada Dems used to court the NRA and pushed pro-business polices. Now, they’re anti-gun, anti-business and anti-Democratic. The base is all in for socialism and the party leadership is running scared. Scared of creating a rift that will hurt them at the polls in this years general election.

If they screw Bernie again, those base voters will split off and hurt the party in the general election. So the Culinary Union and Harry Reid are sitting out this Presidential election, playing the long game and playing it smart by avoiding agitating their hard core base voters.

By letting Bernie win the nomination, and ultimately lose the general election, they can rid themselves of him, once and for all.