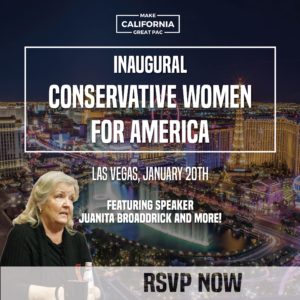 Las Vegas, NV, the Conservative Women for America is hosting a counter-rally this weekend, Jan. 20th, 2018 in Las Vegas, Nevada at 12-3 PM. The rally will be held at the Grant Sawyer Veterans Memorial Building located at 555 E Washington Ave, Las Vegas, NV 89101-1083.

Conservative Women for American spokeswoman Carrie Fleming said “On Jan 21, the “Nasty” Pussy hat wearing liberals will be in Vegas for their “Women’s March”. Thousands of pussy hat wearing women are expected to march in Las Vegas this Sunday. This event is our way of countering the negative narrative of liberal feminism. As you know, their progressive agenda is eroding the core values of our Christian faith, our families, and America.”

Fleming went on to say “We want our voices on Conservative values to be seen and heard. It is important to us to let women and men know that those progressive liberal women and Hollywood Elites do not speak for all of us and we do not share their values.”

This is not a Women’s only event. Men are welcome and encouraged to come.

In addition, there will be a Meet and Greet Friday Night, on the 19th at the Trump Hotel, in the DJT Lounge to celebrate President Trump’s 1-year inaugural anniversary together. 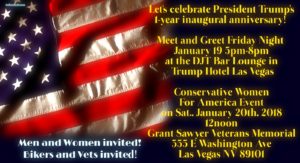