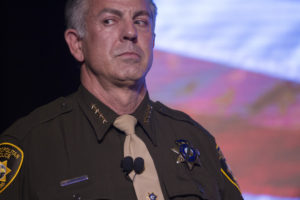 According to several Las Vegas Metro Police Officers we spoke with on condition of anonymity, after Sheriff Lombardo defeated Larry Burns in 2014, Lombardo punished officers who publically back Burns.

The officers were denied promotions, one demoted and several moved around to other stations and put on night shifts. Lombardo’s office refused to comment when contacted by us about the allegations. But Lombardo has made it clear that Metro Police officers this election year better not step out publically and support any opponents.

According to law enforcement sources, Burns has been offered the Henderson Police Chief job ensuring he doesn’t challenge Lombardo next year.