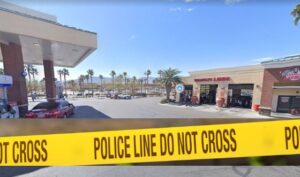 Days before Gov. Sisolak lifted his mask mandate, a gas station store clerk working at Terrible Herbst shot a customer who refused to put on a mask. Gov. Sisolak and the news convinced people that folks who refused to wear a mask put everyone at risk of getting CV19. For more than a year and a half, the CDC told the American people to wear a mask to protect others. As predicted, a leftist loon, but I repeat myself, shot someone for not wearing their mask.

A Terrible Herbst cashier asked a customer to put on a mask. The customer refused. So the clerk refused to ring up his snacks. According to reports, that’s when the customer left with the snacks without paying. The clerk chased him and shot him in the shoulder. Then the store clerk shot himself to death.

But what’s even worse, is that the local corrupt media refused to report this story until today. Every time there’s a shooting somewhere in Las Vegas, the media is alerted and they all rush to the crime scenes. It’s their bread and butter news. But somehow every news outlet in Las Vegas missed this story until today? Clearly they buried the story for the last couple of weeks. The story was covered up so Sisolak would not look like he ended his mask mandate in response to this incident.

Only today, February 17, 2022, 11 days after the shooting, a week after Sisolak lifted his mask mandate did Channel 8 News finally reporting this story and with the most limited of details. No other local news outlets reported the shooting either.

360 News has requested all records related to the incident from Metro Police.