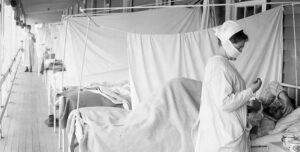 One hundred years ago, the Spanish Flu killed over 50 million people. One year ago, the CDC reported the Spanish Flu also known as H1N1, “Most flu activity so far this season is still being driven by H1N1 infections,” Kristen Nordlund, a CDC spokesperson, told Salon in an email. Nordlund added that “in the last four weeks, H3N2 viruses have been most common in the southeastern part of the country,” Over 60,000 Americans died from the flu in 2019.

According to the CDC, viruses like the Spanish Flu and the Corona Virus mutate constantly. That’s why folks get a flu shot every season with updated vaccines. So even when scientists develop a vaccine for the Corona Virus, it may not work. Even with vaccines, the World Health Organization estimates that worldwide, annual influenza epidemics result in about 3-5 million cases of severe illness and about 250,000 to 500,000 deaths. 100 million people died over the last 100 years from the Spanish flu, people are still dying to this day from the Spanish Flu.

What does this all mean? It means COVID19, just like the Spanish, will be in our environment for ever. The quarantine’s purpose was to provide a lead time for local governments to prepare and ensure hospitals had enough capacity when the main population was eventually exposed to the COVID19. Every person will come into contact with COVID 19 and they will either survive or perish just like billions of people have over the last 250k years. Disease, famine and war have been a check on human populations since the beginning of time. Those of us alive today are the offspring of a thousand generations who survived those challenges. In the shadow of today’s cycle of life and death force upon us by the latest disease, we must move forward just as one hundred generations before us did; our very survival depends on it.