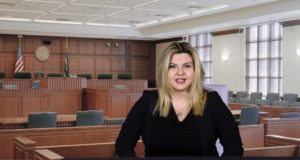 “In President Donald Trump, we finally have someone who will enforce our immigration laws and, as a first priority, work to keep Americans safe,” Fiore says. “I want voters to know this: if elected, I will work diligently to ensure local law enforcement and government agencies are cooperating with federal authorities to enforce America’s immigration laws in Las Vegas and across Clark County. This lawlessness must end.”

Illegal immigration is a significant problem for the Silver State: according to an article by the Las Vegas Review-Journal, more than one in three illegal immigrants processed through the Clark County Detention Center had at least one prior criminal conviction. Nevada is estimated to have the highest proportion of illegal immigrants of any state in the Union and illegal workers make up an estimated 10% of Nevada’s workforce.

“I will continue to support and work to help legal immigrants who have chosen to obey our laws,” Fiore continues. “But to those who are in southern Nevada and committing crimes in our communities, they shall not find sanctuary and special treatment here.  Further, if our local law enforcement needs additional federal funding in order to carry out this mission, I will work with them and our federal delegation to ensure that funding is realized.”