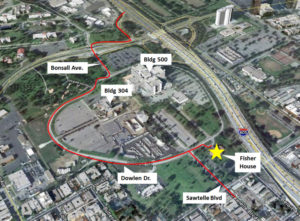 Athletic fields for a private prep school and a dog park, but not veterans

(Washington, DC) – Judicial Watch announced today that it has filed a second Freedom of Information Act (FOIA) lawsuit against the U.S. Department of Veterans’ Affairs (VA) for information regarding non-veteran use of prime real estate in West Los Angeles set aside nearly 130 years ago to serve as a home for disabled veterans. The complaint was filed in the U.S. District Court for the District of Columbia (Judicial Watch v. U.S. Department of Veterans’ Affairs (No. 1:17-cv- 01078)).

The lawsuit was filed after the VA failed to respond to an April 14, 2017, FOIA request concerning the Veterans’ Affairs Greater Los Angeles Healthcare System (VAGLAHS):

(iv)       The Committee on Appropriations of the U.S. House

The property at issue was deeded to the federal government in 1888 for the specific purpose of providing a home for disabled veterans. It includes a veterans’ home, but, over time, came to include facilities for entirely unrelated uses such as a stadium for UCLA’s baseball team, an athletic complex for a nearby private prep school, a golf course, laundry facilities for a nearby Marriott hotel, storage and maintenance facilities for 20th Century Fox Television’s production sets, the Brentwood Theatre, soccer practice and match fields for a private girls’ soccer club, dog park, and a farmer’s market.

Veterans sued the VA to restore the 388-acre site to its proper use, and some of the non-veteran related uses have been terminated. In October 2015, former VA Secretary Robert A. McDonald and attorneys representing homeless veterans reached a settlement, vowing that the campus would be dedicated to serving and housing veterans in need, particularly those who were female, aging or disabled. This is Judicial Watch’s second FOIA lawsuit seeking information about use of the parcel.  The first lawsuit (Judicial Watch v. U.S. Department of Veterans’ Affairs (No. 1:17-cv-0994)) was filed May 24, 2017, in federal court in the District of Columbia.

It’s understandable that this project will take years to complete — that’s calculated into the master plan. It is a colossal undertaking to remake a 388-acre campus. The VA did not even receive the necessary congressional authority to enter into leases with developers and service providers until September.

The problem is, there really is no new development yet. And now the VA says the first phase of 480 units will take four years to install, not 2½.

[T]he VA didn’t hire consultants to implement the master plan and conduct a lengthy environmental study until almost a year after the plan was adopted. The study is expected to take two years. Until it’s done, construction can’t begin on the 150 units planned for MacArthur Field.

“The misuse of this Los Angeles veteran’s facility is a symbol of how the VA mistreats veterans,” said Judicial Watch President Tom Fitton. “Our new lawsuit aims to hold the VA accountable to the rule of law and to the veterans whose interests it is supposed to serve.”