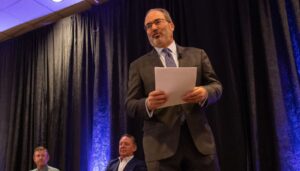 According to reports, Perkin’s partner, Mike Willden, a former director of the Nevada Department of Health and Human Services, called the Governor’s office to help get Northshore’s lab testing licenses expedited. Willden lobbied Sisolak’s chief of staff, Yvanna Cancela, who pressured the director of the state’s pandemic response, who pressured the head of the state’s licensing bureau, Cody Phinney. She in turn moved up its inspection of Northshore’s Nevada headquarters in Las Vegas over the objections of Inspector Bradley Waples. Waples claims he was allegedly pressured to move Northshore to the head of the line under protest.

Northshore all of a sudden, had thousands of new customers who needed weekly testing even without a surge of infections. And for each person, Northshore was paid by the Feds $165 and $260 for administering the two tests, claiming they were uninsured. Northshore pocketed $165 Million, according to federal reports.

But Northshore’s testing results at the University of Nevada Reno drew the attention of the Director of the Student Health Center, Dr. Cheryl Hug-English, who ran her own investigation into Northshore testing with the state lab. And she discovered that more than 96% of the PCR results from the Nevada State lab that came back positive, Northshore reported as negative.

Ralston’s news outlet, the Nevada Independent, also worked hard to uncover the Northshore testing scandal. So when 360 News received over 300 pages of email documents from the Sisolak Administration it was clear that Jon Ralston, left leaning news reporter, was shocked by the depth and scope of the crisis that faced Gov. Sisolak. This is directly from an email Sisolak’s administration obtained early on from Ralston. Ralston himself labelled it a “NIGHTMARE STORY FOR SISOLAK ADMINISTRATION”.

“There are a few heroes in state government here, but this is mostly a story of a systemic breakdown fueled by political juice and one that probably got people killed.” 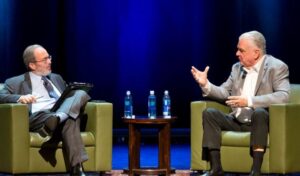 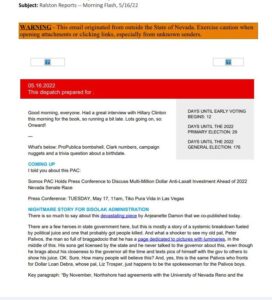 There is so much to say about this devastating piece by Anjeanette Damon that we co-published today.There are a few heroes in state government here, but this is mostly a story of a systemic breakdown fueled by political juice and one that probably got people killed. And what a shocker to see my old pal, Peter Palivos, the man so full of braggadocio that he has a page dedicated to pictures with luminaries, in the middle of this. His sons get licensed by the state and he never talked to the governor about this, even though he brags about his closeness to the governor all the time and texts pics of himself with the gov to others to show his juice. OK. Sure. How many people will believe this? And, yes, this is the same Palivos who fronts for Dollar Loan Debra, whose pal, Liz Trosper, just happens to be the spokeswoman for the Palivos boys.Key paragraph: “By November, Northshore had agreements with the University of Nevada Reno and the Washoe County School District. By December, Washoe County itself had signed on. In Southern Nevada,the city of Las Vegas signed an agreement for testing in multiple locations, and the city of Henderson allowed the lab to use a parking lot at one of its recreation centers.”Nothing to see here.The political ramifications here are obvious, and Team Lombardo must be salivating. And so many remaining questions: Will the AG investigate? Who got this company juiced into local jurisdictions, such as the city of Las Vegas and Henderson?Trust me, folks: This is closer to the beginning of this story than the end.