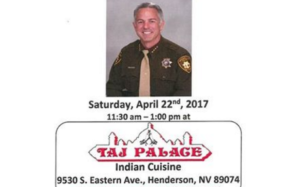 Clark County Sheriff Lombardo is acting like a man running for re-election speaking at a local Asian group, SAPNA, scheduled for 11:30am April 22, 2017 at Taj Palace 9530 South Eastern Henderson, NV 89052. Lombardo has been embroiled in controversy over his sanctuary city policies that were recently highlighted by ICE illegal criminal alien detainer reports listing Las Vegas Metro Police as the number one offending county in the entire country. According to local political sources, Lombardo’s Internal re-eleciton numbers are hovering around 38%, forcing him to start campaigning now for next year’s 2018 mid term elections.

Then it was reported that Lombardo had donated thousands of dollars to the ACLU/Black Lives Matter and other sanctuary city anti police groups last year but only donated $205 to pro police groups. Randy Sutton, Retired Police Lt. and Blue Lives Matter spokesperson highlighted the ACLU/Black Lives Matter as a racist hate group responsible for instigating the rash of cop killings last year. Sutton went on to say he couldn’t imagine any police officer supporting the ACLU.

This first public appearance by Lombardo is sure to draw critics and even perhaps law and order protesters upset with Lombardo’s recent announcement that Las Vegas Metro Police is refusing to enforce immigration laws and will be a sanctuary city. Lombardo made the announcement through a Public affairs officer in Spanish at a Sen. Cortez Masto town hall for immigrants. This has drawn the threat of federal funds being cut off from Metro directly from U.S. Attorney General Jeff Sessions himself just a couple of weeks ago.

In addition to Sanctuary City policies, Lombardo has drawn fire for his support for Question 1, the gun background check law, and his recent op-ed supporting a new law limiting the size of gun magazines. NRA type Nevada 2nd Amendment groups have made Lombardo a target in 2018.

In 2014 Joe Lombardo ran as a Republican, pro 2nd Amendment Sheriff and has alienated the very people who voted for him. The murder and gang violence crime rate has skyrocketed to a 30 year high under his leadership. His sanctuary city policies have brought national attention on him.  All of that has sunk Lombardo’s public support at an all-time low putting his re-election in serious doubt today. His internal numbers are so low Lombardo has to start campaigning now for re-election in 2018 if he wants any chance of keeping his job next year.