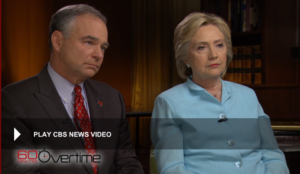 Last night on 60 minutes Hillary Clinton responded to the Wikileaks release of 20,000 DNC emails saying “I don’t know anything about those emails.” Clinton recently avoided a grand jury referral by the FBI over her handling of her classified emails but now faces a brand new scandal regarding DNC emails showing she and Debbie Wasserman Schultz possibly rigged the primary election stealing it from Bernie Sanders and much more to come over the next several days and months. Debbie Wasserman Schultz resigned over the email scandal but was quickly hired by the Clinton campaign according to reports.

Will this latest email scandal continue to bog her opinion polls down through November? Clinton’s unfavorables are at 55.4 percent nationally when you combine seven recent polls and over 60% of Nevada have a very or somewhat negative opinion of her according to a Rasmussen done over the weekend.

The reason question is, does anyone believe her this time when she says she didn’t know anything about the emails at the DNC?