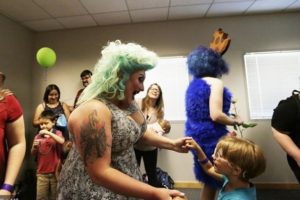 Yesterday, the Henderson Public Libraries hosted another transvestite story time at the Green Valley Library sparking more protests, including from the Texas based group, Mass Resistance, who were declared a “Hate Group” by the Southern Poverty Law Center recently. But the only thing on their Facebook Page and website are parents protesting Drag Queen Story Time at public libraries.

Mass Resistance’s Facebook page describes their group as “a pro-family activist organization on the front lines against the attacks on traditional family, religion, and society.”

But being labeled a Hate Group by the Southern Poverty Law Center can get you banned by Twitter and Facebook, banned from certain banks and attacked by MSN News outlets like Channel 13 Las Vegas News did today in their report. Channel 13 KTNV covered the protest outside the Green Valley Library where Mass Resistance had organized. Local Left wing Pro Gay groups also counter protested. KTNV used the Southern Poverty Law Center’s label when describing Mass Resistance in order to discredit them.

But Mass Resistance has had huge success in Texas shutting down Drag Queen Story Time after they exposed 2 of the Drag queens “Earlier this year, research by our Houston MassResistance leader Tracy Shannon revealed that not one, but TWO convicted child molesters were allowed to read to children in the Houston Public Library as part of its Drag Queen Story Hour (DQSH) program. City officials quickly shut it down.

The Henderson Library admitted they had not conducted background checks on the Drag Queen. According to Henderson Staff, who spoke with 360 News Las Vegas on condition of anonymity they admitted that the Henderson Library was unaware of Drag Queen Matt Durski aka Polly Porcelain’s extremely sexual You Tube videos and his background. In fact, they admitted there was no background check done prior to allowing a Drag Queen to host Story Time for 3 years old at the Henderson Public Library tomorrow at 10am. There are photos featuring him with a dildo in his mouth. In one of his drag queen acts, he is repeatedly singing the word “bitch”, and then simulating oral sex.”