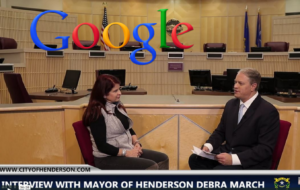 Henderson Mayor Debra March announced Henderson will be the home of the new $600 million Google data center that will support North American services for YouTube, Google Calendar and Gmail. Henderson expects more than $94 million in tax revenue over the next 20 years from Google and hundreds of new jobs. This is a great achievement especially after Mayor March landed the new Raider’s training facility.

Henderson, under March’s leadership is also rebuilding its downtown Water Street into a foodie and entertainment destination. With all this new activity, the new jobs expected and Henderson  just named one of the top safest cities in the nation for the tenth time expect real estate prices to start climbing.