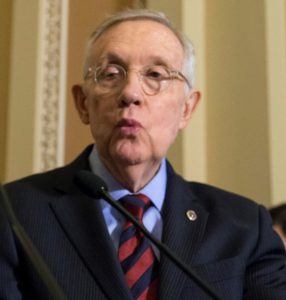 Today, Nevada Senator Harry Reid wrote an open letter to FBI Director Comey, yes the same guy who couldn’t find any criminal intent in the missing 30,000 Clinton Emails with numerous marked classified stored on a server in her bathroom, claiming Russia was tampering with the Presidential Results.

According to the AP, Reid wrote that the threat of Russian interference “is more extensive than is widely known and may include the intent to falsify official election results.” Recent classified briefings from senior intelligence officials, Mr. Reid said in an interview, have left him fearful that President Vladimir V. Putin’s “goal is tampering with this election.” In his letter to the F.B.I., he offered no specifics about how Russian hackers could manipulate election data.

AP went on to report, the F.B.I. warned state election officials several weeks ago that foreign hackers — the bureau did not say what country they were from — had exported voter registration data from computer systems in at least one state, and had pierced the systems of a second one.

Presidential polls in many states have tighten up over the past two weeks as more revelations come out about Hillary Clinton’s emails and her time in the State Department in a never ending drip drip drip of damaging news.