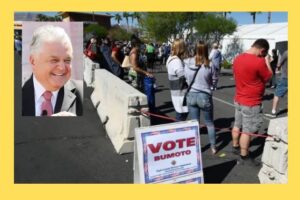 Gov. Larry Hogan of Maryland renewed the CV19 state of emergency on Friday. Hogan called for folks to remain vigilant in the fight against COVID-19.

“While Maryland’s positivity and case rates remain lower than most states in America, we are closely monitoring increases in some of our key health metrics as well as rising numbers in states across the country,” said Governor Hogan. “This crisis is far from over, and this virus does not recognize state borders. I want to remind Marylanders that the only way to keep our state open for business is to avoid traveling to hotspots and continue following the public health guidelines. We cannot let our guard down, and we must remain vigilant.”

Most Dems are scared to death to venture out of their homes to vote, but Republicans are highly distrusting of mail-in-ballots and many are determined to vote in person on Tuesday.

Many folks in Nevada and across the country are concerned that, as Republicans get set to vote in person on Election Day, Dem Governors may use CV19 as an excuse to hinder Republican voters’ access to polling sites on Tuesday. The media continue to hype an increase in CV19 cases (mostly through increased testing) giving cover for dirty tricks by partisan Governors like Sisolak.