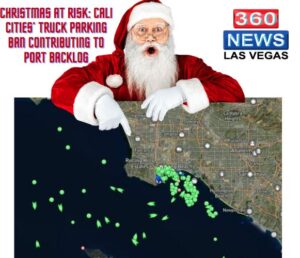 The average semi-truck and trailer measures over 86 feet long. The average container ship carries 1,000 containers. That means it requires one thousand trucks to transport cargo from one ship from the Southern California Ports to warehouses across the country.

Las Vegas is solely dependent on trucks and trains to bring in all our food and goods in. After trucks move their goods, they need a place to park. Liberals in California have put the squeeze on truck parking contributing to the lack of trucks to transport from the ports to Las Vegas and beyond. Many Southern California Cities have banned any new truck yards, even in industrial zoned areas. This has pushed the cost of land and truck parking through the roof.

To put it in perspective, land in Las Vegas may cost around $1 million an acre for a truck yard or lease for between $2K and $3K per month per acre. In Southern Cal, you would be lucky to pay $10K to $20K per acre to lease land zoned for trucks.

Keep in mind, most of the port trucks are owned by independent owner/operators, mostly Hispanics and Blacks.

Many of these Southern California cities even ban overnight truck parking at warehouses. We spoke with many commercial real estate agents about parking trucks at warehouses and they confirmed many cities do not allow it.

360 News recently spoke with a commercial real estate developer who did not want to be named in this story. He told us of his business crisis. He borrowed money from a bank to develop apartment units with very specific deadlines for construction progress. The only problem is, the dry wall and AC units have been stuck on a ship outside the Long Beach Harbor for weeks. He’s at risk of defaulting because of the delays.

When one puts together Southern Cal’s Green diesel truck rules, truck parking bans and driver shortages we have a perfect storm for a national crisis.