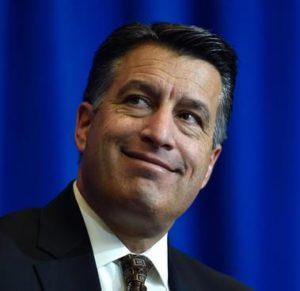 According to the Henry Kaiser Family Foundation Health Insurance study, the average insurance policy for a family of four in Nevada, buying their own policy directly, will pay $8,600 annually with an annual out packet maximum $14,500, but Gov. Sandoval’s health insurance for him and his family is subsidized by Nevada taxpayers. So when Sandoval came out against efforts by Republicans in Congress to repeal and replace Obamacare it raised questions about what he is actually paying for his health insurance.

The average Nevada public employee health insurance premium is subsidized by taxpayers from 75% to 93%. So for example, an employee on a State PPO, has a monthly premium of $598. But after the 93% taxpayer subsidy, the public employee is paying only $41.91 per month. In addition, according to sources, Nevada public employees have a $1,900 annual deductible but receive a prepaid credit card with $750 to pay towards the deductible.

When 360Daily.net called Nevada Public Employee Benefits Program office today and asked what Governor Sandoval’s annual health insurance premiums and taxpayer subsidies are they refused to provide the information. In addition, 360Daily.net contacted the Governor’s office directly requested the information about the Governor’s health insurance premiums and never heard back.

According to Nevada Public Research Institute “Complete and accurate information is necessary to increase public understanding of government and help decision makers, including elected officials and voters, make informed decisions.”

According to transparentnevada.com, Gov. Sandoval received $148,755 last year and received over $36,000 in benefits, including health insurance subsidized by taxpayers. But the report does not separate the retirement contributions and healthcare benefits. 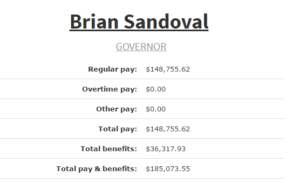