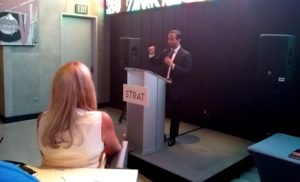 Last night, George Papadopoulos, former foreign policy advisor to Donald Trump’s 2016 presidential campaign and Mueller probe target, spoke to a group of Trump supporters Wednesday night at the Tap House at the Strat. On October 5, 2017, Papadopoulos pleaded guilty to making false statements to FBI agents in 2016 relating to the now defunct Russia collusion investigation conducted by Bob Mueller. Papadopoulos served twelve days in federal prison and is currently on supervised release for about one year.

Papadopoulos was at the event to pitch his new book Deep State Target: How I Got Caught in the Cross hairs of the Plot to Bring Down President Trump.. He took questions from the audience and expressed his continued support for President Trump.

The group, MAGA Meet Up, formed earlier this year to provide a safe space for Trump supporters to meet with each other without attacks from radical liberals.

The group was started by Courtney Holland, Megan Barth and NV Tiffany. 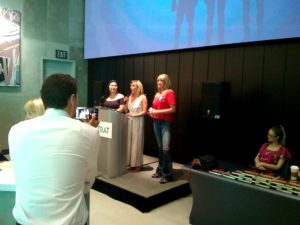