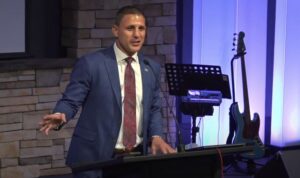 In the world of Google Search Results, the truth doesn’t matter. Slandering political candidates with fake news story headlines by local Democrat News outlets who Google lists in the top search results has become the new weapon of the political class. A Political Campaign is about defining your opponent before they define themselves or you.

Joey Gilbert has been the most outspoken critic of Gov Sisolak’s mask and vax mandates since day one. He sued Sisolak in March of 2020 when Sisolak’s prison hoarded hydroxychloroquine after banning it for use by the general public against CV19.

Reno Lawyer and Republican Candidate for Governor Joey Gilbert’s Google Search results should lead with his victory one year ago in the 9th Circuit of Appeals, where he and Sigal Chattah defeated Sisolak’s church CV shutdown. Or the lawsuit against Sisolak’s mask mandates for the Clark County School District. Or a dozen other lawsuits and news worthy events over the past 2 years. But the Democrat run News in Nevada purposefully and intentionally buried Joey’s name in the lawsuit stories over the past couple of years.

So, on the one year anniversary of Joey and Sigal’s win in Federal Court, the Democrat run News in Nevada burped out a fake news story about some intern in Joey’s Law office supposedly writing a brief. And now the NV Bar is looking into it.

As reported by the Fake Democrat News

“A disciplinary panel sent Republican Joey Gilbert a draft letter of reprimand alleging he had harmed a client by not supervising a law student assigned to his case.”

To say the NV Bar is politically motivated is an understatement. According to sources in Joey’s campaign, the interns’ brief in question was never actually filed. So there was no harm, nor any breach of the law. But the truth and the facts were not the goal in releasing the “draft reprimand”. The goal was to create a Fake News headline to damage Joey Gilbert’s Google search results. Most folks won’t read the story when they see several headlines in their search results.

The Democrat News and their allies at Google are counting on people being too stupid and lazy to actually read the stories and do their own research. And when a monopoly like Google buries the facts on page 5 of your search results they can get away with it.