EXCLUSIVE: Only Half of Las Vegas Shooting Victims Received Full Autopsies, According to Officials

EXCLUSIVE: Only Half of Las Vegas Shooting Victims Received Full Autopsies, According to Officials 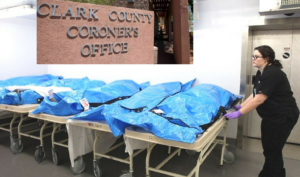 In a shocking twist in what has already proven to be a shady investigation, this reporter has learned that Las Vegas authorities only conducted autopsies on half of the victims of what is now known as the worst mass shooting in U.S. history.

LAS VEGAS, NV(Laura Loomer) — According to two sources within the Clark County coroner’s office, only half of the 58 victims who were killed on October 1st, 2017 received a standard autopsy.

The officials, whose identities and professional backgrounds have been independently verified and kept anonymous to protect their jobs, both emphasized their dismay over the fact that some of the victims did not receive fair treatment.

“Our two biggest concerns are an autopsy was not performed on every single homicide victim, which is the standard practice within the Clark County coroner’s office,” one source recounted. “We also find it troubling that the official number of deaths never increased, despite hearing from colleagues that more victims had died in local area hospitals following the shooting.”

Highlighting the sheer irregularity of the decision, one of the officials said, “I’ve participated in thousands of autopsies and never had an instance where I didn’t conduct a full body autopsy on a homicide victim.”

Colleagues of Dr. Gavin noted how oddly excited and eager she was to conduct the autopsy, jokingly adding they “wouldn’t be surprised if she performed a rape kit on Paddock because she seemed to want to perform every test in the book.”

Clark County Coroner Dr. John Fudenberg told the Associated Press in December that an autopsy on Paddock’s body was able to determine he had died by suicide from a single self-inflicted gunshot wound to the mouth.

Speaking by phone on Monday, Dr. Fudenberg declined to comment on the report that only half the victims received full autopsies.

Ironically, two days before the Las Vegas shooting, a lawsuit was won resulting in a legal mandate that all autopsies be open to public inspection.

Dr. Fudenberg said his office is defying this order because the ruling was appealed and is currently under review by the Nevada Supreme Court, and until a decision is rendered, all autopsies, not just those from the Las Vegas shooting, will remain sealed.

On the subject of why the Clark County coroner’s office was closed to the public during the aftermath of the shooting, Dr. Fudenberg vehemently denied claims there was a lockdown, and referenced safety concerns as to why the doors were locked, and an armed guard was posted outside.

Dr. Fudenberg’s duplicitous answer regarding the number of autopsies that were conducted on the victims mirrors the same lack of transparency which has now defined the infamous investigation of the worst mass shooting in U.S. history.

Ultimately, these actions, along with the decision to not perform full autopsies on the bodies of every victim, may cost Las Vegas more than its law enforcement’s credibility.

According to this reporter’s sources in the coroner’s office, the failure to conduct proper and thorough examinations of the deceased may unduly affect the number of monetary damages received by victim’s families.

“When this is taken to court to determine how much money in damages each victim’s family deserves, they’re going to ask the forensic pathologist any number of questions about what they saw in the body,” one of the medical officials said. “If they ask that on every single case, the question will be, why didn’t you do that? Why not on this one?”

These failures in basic protocol may facilitate crippling lawsuits against the city, from families who may not be able to prove their loved ones actually died from gunshot wounds inflicted by Paddock.

“You want to see the wound path to see which organs the bullet(s) hit,” the medical officials explained. “You can’t testify to what actually killed someone with 100% certainty unless you go inside the body.”

Pointedly summarizing the infuriating sentiments of this troubling report, one of the medical officials added, “if my loved one wasn’t given a full-blown autopsy, I’d want specifics, I’d want to know how exactly the bullet killed them, without it, you just don’t know.”