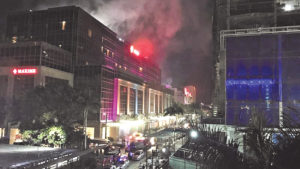 Sunday morning, immediately after the Mandalay Bay attack, ISIS took credit. But then the FBI dismissed any such links to ISIS. Then ISIS later in the day gave specific details claiming Stephen Paddock had converted to Islam four months earlier and his new Muslim name was “Abu Abd El Bar”. Back in May 2017, ISIS had also issued a call for attacks on Las Vegas.

June 3, 2017, ISIS claimed responsibility for an attack on a Manila casino that killed 32 people. The Islamic State claimed responsibility for the attack at Resorts World Manila, in which dozens died of smoke inhalation. But President Rodrigo Duterte and Philippine police officials denied that, saying the motive had been robbery. They noted that the attacker was armed with an assault rifle.