DOES SISOLAK’S CALI TREATY THREATEN TO BREAKUP THE U.S.?

DOES SISOLAK’S CALI TREATY THREATEN TO BREAKUP THE U.S.? 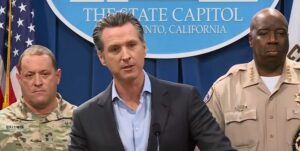 Just two weeks ago, California Governor Gavin Newson referred to California as a “Nation State”. Speaking on MSNBC, Governor Newsom said that he would use the bulk purchasing power of California “as a nation-state” to acquire the hospital supplies that the federal government has failed to provide. If all goes according to plan, Newsom said, California might even “export some of those supplies to states in need.”

“the Republican Party’s war on democratic values, institutions and laws has been a largely one-sided affair, with the GOP assaulting and the Democratic Party defending. The lethal ruling this week by the U.S. Supreme Court’s Republican bloc, which required Wisconsin residents to vote in person during a pandemic that shut down polling stations, is a preview of the fall campaign. The GOP intends to restrict vote-by-mail and other legitimate enfranchisement to suppress turnout amid fear, uncertainty and disease.

At some point this civil war by other means, with the goal of enshrining GOP minority rule, will provoke a Democratic counteroffensive. Newsom, leader of the nation’s largest state, is perhaps accelerating that response, shaking Democrats out of denial and putting Republicans on notice.”

Bloomberg News goes on to say

“The GOP war on democracy is inspired by a drive for racial and cultural supremacy that jeopardizes the democratic aspirations and human rights of California’s multiracial citizenry.

No state shall enter into any treaty, alliance, or confederation; grant letters of marque and reprisal; coin money; emit bills of credit; make anything but gold and silver coin a tender in payment of debts; pass any bill of attainder, ex post facto law, or law impairing the obligation of contracts, or grant any title of nobility.

No state shall, without the consent of the Congress, lay any imposts or duties on imports or exports, except what may be absolutely necessary for executing it’s inspection laws: and the net produce of all duties and imposts, laid by any state on imports or exports, shall be for the use of the treasury of the United States; and all such laws shall be subject to the revision and control of the Congress.

We are citizens of both the United States of America and citizens of the States we reside in. No state may limit and/or strip you of your American citizenship. But that is exactly what the confederate states did when their leaders (not the people) voted to secede from the Union. Lincoln said those citizens who reside in those rebel states are still American citizens. That issue was settled after more than 750,000 Americans died fighting each other. So unless Nevada, California, Oregon and Washington State have the approval of Congress and President Trump in bill, then they are all violating the Constitutional oath they swore before all mighty God.

Now Gov. Sisolak wants to commit the State of Nevada to a treaty with California, Oregon, Washington, and Colorado, all socialist Democrat led states claiming its to help deal with the corona virus. But he didn’t include our actual two border states, Arizona and Utah. The problem is not only is this blatantly unconstitutional but I never voted to let California govern me. But California is so big and powerful it would certainly dominate any such “PACT” as the Governor calls it.

But even more alarming is that such “PACTS” threatens the stability and cohesion of the United States of America. One just needs to look at history to see how Rome and other large nation states fractured over time eventually dissolving.

California Governor Newson and Sisolak’s PACT are designed to challenge the Authority of the Federal Government, particularly if Pres. Trump is re-elected in November by threatening to break up the US. And don’t think that Mexico, China and many European Countries won’t recognize the new Nation State of California and provide support. Mexico, China and Europe would love nothing more than to see the United States break up into smaller pieces they could pit against each other. Our courts, media and institutions all have proven their disloyalty to our Country by siding with China against Trump through this Corona Virus pandemic. Also keep in mind these states have activated their national guard.

The Democrats are laying a basis for declaring the November National elections null and void if Trump wins and threatening to go their own way with PACTS like Sisolak wants to commit Nevada’s 3 million citizens to threatening to spark a 21st Century civil war in the U.S. The Corona Virus lock down has created an extremely dangerous situation for the security of our country right now. We must remain vigilant to ideals of our Republic and never stop defending our Constitutional Rights. We must not allow any outside forces to use this current crisis to divide and conquer us.