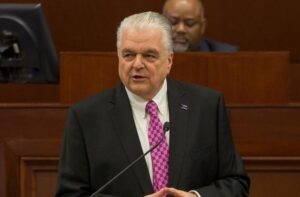 Yesterday, following Nevada Governor Steve Sisolak signing yet another politicized State of Emergency Declaration, he went on TV and said he is banning the anti-malaria drugs chloroquine and hydroxychloroquine for use against the Corona Virus and limiting how many a pills a patient can receive for approved uses, unrelated to the COVID19. This set of a firestorm in Nevada and across the nation.

Now, Nevada corona virus patients are in full panic which may pose a nation threat if they decide to flee to other states, like New York, which are aggressively treating the virus with the anti-malaria drugs and have reported receiving up to 70,000 doses of the drugs. Just imagine sick, desperate people fleeing the state, potentially infecting folks in other neighboring states seeking the drugs.

Even though the anti-malaria FDA drugs were not approved for use against the corona virus, there’s so much significant evidence coming out from around the world that Vice President Pence has announced the FDA is preparing to approve the drug for “other uses” clearing the way for use against the Corona Virus.

When the FDA approves a drug it’s actually using it’s federal power to issue a license the drug manufacture to distribute and sell the drug. Under the supremacy clause and commerce clause of the U.S. Constitution all the States must accept the license as issued by the FDA. It’s also an equal protection issue. Every citizen, including every Nevada citizen is entitled to use an FDA licensed drug prescribed by a medical doctor.

Federal Courts have concluded that “The congressional statute governing the approval of new drugs implicitly preempts state’s action and that a prohibition on the sale of an FDA-approved product in a particular state probably would stand as an obstacle to the accomplishment of federal purposes, which she understood as “making drugs available to promote . . . the public health.” Judge Rya Zobel in Zogenix v. Massachusetts.