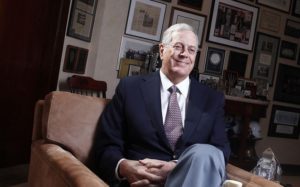 Straight from the NY Times today “David Koch, Billionaire Who Fueled Right-Wing Movement, Dies at 79″. For Dems everything is about politics first. If someone is a liberal or conservative or God forbid a libertarian, that is far more important than any good or bad they may have done in their lives. Harry Reid once called the Koch Brothers “un-American,” deeming their philosophy one “that benefits billionaires at the expense of the middle class.”

But Mr Koch was first and foremost an extremely generous man who gave over $1.2 Billion to the arts, including to the Lincoln Center for the Performing Arts, the American Museum of Natural History and The New York-Presbyterian Hospital.

But even after he donated billions to the arts, the liberal press today could not help themselves as the rip his legacy for his support of less government Libertarianism. You can read numerous headlines describing calling Koch a “Conservative” (as if its the worst word in the world). But Mr. Koch was a self-described libertarian who supported open borders, open trade. In fact, Koch was a huge supporter of prison and criminal justice reform and help push through legislation this year. But he also supported school choice and less taxes. His less tax group, Americans for Prosperity, made huge inroads throughout the country influencing and helping shape the debate.

Politics is all issue driven, not personality driven for people at his level. Even though the Koch Brothers supported President Trump’s tax reforms and criminal justice reforms, the Koch Brothers have been at odds with President Trump over immigration, the border wall, which they opposed, the trade war with China, which his company profited off of to the tune of Billions a year from their suppliers in China.

Libertarians are socially liberal and fiscally conservative, or in simple terms, they want the government out of the bedroom and out of the boardroom.

David Koch’s brother, Charles, announced his passing today in a press release but did not say how he died. Unlike the Dems who funnel tax dollars thru Planned Parenthood to Dem candidates, look for his Brother Charles to continue to fuel their Libertarian causes with their hard earn money well into the future.