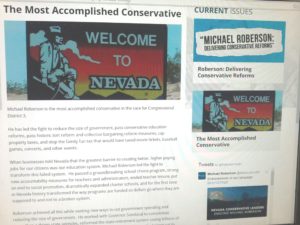 State Senator and now Congressional Candidate Michael Roberson, ran for the Nevada State Senate pledging not to raise taxes. He even signed the taxpayer protection pledge. But after he was elected, Roberson lead the effort last year to pass Gov. Sandoval’s $1.5 billion business tax increase along with the following taxes:

Roberson is now trying to run as a conservative in CD3 to replace Congressman Heck who recently attacked the tax increase Roberson was instrumental in passing last year saying “the gross margins or commerce tax…that was passed last time, and what an impact that can have on small businesses and their ability to grow and add to their payroll.” Congressman Heck’s spokesman went on to say “Dr. Heck talks to small business owners across Nevada about their ability to grow and create jobs. They express concerns about the regulatory burdens of Dodd Frank and the Affordable Care Act, as well as uncertainty about the commerce tax. As a former small business owner, Dr. Heck shares those concerns.” 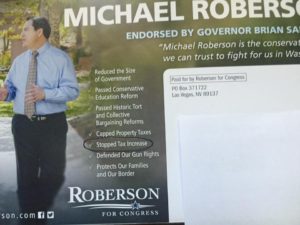 NEWSMAXTV LAS VEGAS recently obtained a mailer Roberson sent out to voters claiming he, Roberson, “STOP TAX INCREASES.” This is a flat out lie and Roberson is again defrauding his voters running as a conservative then governing as a liberal. His mailer also claims he “Passed Conservative Education Reforms.” In fact, Roberson fully supports common core, the liberal Washington top down educational plan may conservative groups accuse of trying to dumb down our kids and indoctrinate them with liberalism. Roberson’s mailer goes on to state he “Defended Our Gun Rights” when in fact he blocked a bill which would have given women, with a concealed carry permit, the right to protect themselves against rapists on Nevada college campuses. The mailer also claims Roberson “Reduced the size of Government.” Again false, he grew the budget by $1.5 billion dollars.

The problem is, when Republicans like Roberson and Gov. Sandoval run as conservatives but then govern as liberals they’re damaging the Republican brand. If you buy Coke you don’t want Pepsi. Mr. Roberson’s policies belong in the Democratic party and his malicious actions hurt all Republicans by destroying trust in the election system. Nevada Republicans are saying, if Robertson wants to govern as a liberal then change parties, be honest with the voters and stop defrauding them with scammy mailers. Mr. Roberson fooled Republican voters twice in the past, shame on him. If Roberson fools Republican voters this time shame on us.