GUN SALES UP 245% AMERICANS SUPPORT GUN RIGHTS WITH THEIR WALLETS

GUN SALES UP 245% AMERICANS SUPPORT GUN RIGHTS WITH THEIR WALLETS 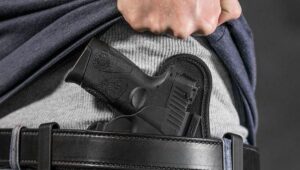 One year ago Democrats were pushing gun control across the country in every state house they controlled. So its ironic that Democrats’ policies have been the biggest boast to gun sales in history. Antfi and BLM riots, defunding the police and releasing criminals without bail mixed in with a pandemic have driven up gun sales to all time highs.

Gun sales would have been much higher in fact, if gun stores had not run out of guns and state back ground check systems weren’t backed up for weeks. But still, June 2020 some a 245% increase in gun sales. According to FBI background check numbers, some 2.45 million guns were sold in the month of June 2020 compared to 973,000 in the month of June 2019. It turns out Democrats are the best gun salesmen on the planet.

But the pandemic panic gun rush in March 2020 saw the highest gun sales ever, 2.583 million gun sales. And the gun sales on Main Street are driving Gun Stocks higher on Wall Street. Smith and Wesson (SWBI) stock is up 500% year over year. SWBI stock price hit a low of $5.41 this year before the riots in March and hit a high of $27.79 per share this month.

Gun sales could continue to spike especially if Democrats win the White House or the U.S. Senate. When Obama won reelection in 2012, December gun sales went through the roof on fears of gun control laws. John Roberts has created uncertainty about just how the Supreme Court will handle gun lawsuits like we’ve seen come out of California. The court has punted on “assault rifles” and conceal carry laws so far.

Nevada Dems past extreme gun control laws in 2019 that are currently being challenged in court. Nevada saw huge gun sales at the beginning of the pandemic with most stores sold out of guns and ammo. BLM and Antfi Rioters trashed down town Las Vegas, shot a cop in the head and torched police cars in June.

Democrats who made gun control the center piece of their legislative work in 2019 state houses, made little or no mention of gun control at their Convention last week. The pandemic and riots have turned average Democrat voters into gun owners and 2nd Amendment advocates.