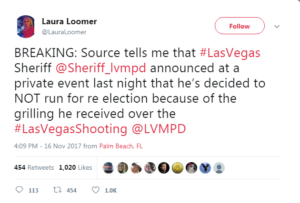 Laura Loomer just reported, Lombardo said he’s not running for re-election after grilling he’s gotten in the press about his handling of the Vegas Mass Shooting. This report has not been confirmed by any Las Vegas Metro Police source yet.