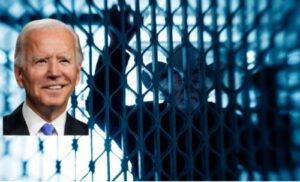 As reported in the American Greatness news site by Julie Kelly:

n one of the most iconic images of January 6, a man is pictured with his feet up on a desk inside House Speaker Nancy Pelosi’s (D-Calif.) office.

Richard Barnett, 60, traveled from his home in Arkansas to hear Donald Trump’s speech then made his way to the Capitol complex. He entered Pelosi’s office, where a few photojournalists just happened to be stationed; Barnett put his feet on the desk, posed for the cameras, and left Pelosi a note. (He is quite a character, I can safely say after a lengthy phone interview.)

Two hours later, the photos went viral. Pelosi’s daughter, Christine, posted the picture of Barnett at 3:21 p.m. that afternoon. “The Trump rioter did vandalize her office,” she tweeted. “The trash will be removed and the seditionists will be prosecuted.”

That incident started a legal and personal nightmare for Barnett, who spent nearly four months behind bars before a federal judge finally released him in April.

By the time Barnett arrived home on January 7, his family already had received death threats and the FBI was at his door. Barnett was arrested January 8; he was indicted January 29 on various trespassing and disorderly conduct charges, including possessing a “dangerous or deadly weapon,” a walking stick that can also be used as a stun gun. (It had no batteries.)

“I was transported to a prison in Oklahoma City for two weeks,” Barnett, who goes by the nickname “Bigo,” told me in a phone interview Tuesday afternoon. “I had never been to prison before, it was my first experience. I thought how awesome it was that even though you’re in prison, you’re treated with respect and everyone follows the rules.”

But Barnett’s inaugural experience in America’s prison system quickly soured after he was transported to the nation’s capital. Like dozens of people charged with offenses related to the Capitol building protest, Barnett was ordered to remain behind bars in a D.C. jail with no chance to make bail even though he has no criminal record and faces no violent charges.

Joe Biden’s Justice Department, nonetheless, is seeking pretrial detention orders for many Capitol Hill protestors; in some cases, prosecutors argue the defendants pose a threat to society because they doubt the outcome of the 2020 presidential election.

Upon arrival at the D.C. jail, January 6 defendants are ordered to quarantine for two weeks to follow COVID-19 rules. Detainees are not allowed to leave the quarantine cell for any reason.

Once the quarantine period is over, detainees are moved to another permanent unit, which is not unlike the quarantine quarters. “First off, all the cells are contaminated with black mold, even the sink we are supposed to drink out of,” Barnett said. “The guards gave us some kind of cleaner but it didn’t really work.” The cells are roughly 70 square feet with a concrete slab for a bed, a toilet, and a sink.

Detainees are held in solitary confinement conditions for 23 hours a day. Breakfast, Barnett said, arrives at 3:30 in the morning and is inedible “slop.” Dinner usually consists of bologna.

During their one hour of free time each day, detainees must attend to all personal business including hygiene such as a shower. The men don’t have access to shaving gear or haircuts. “The barbershop is closed. The best we could do was use a toenail clipper they gave us.”

Most detainees, however, spend the hour on the phone with family. “They are worried about their family, about their finances.” Barnett, a former firefighter and bull rider, said he counseled the younger inmates whenever he could. “Nothing fazes me but these men are worried about losing their homes and this was three months ago. Many of them are young and have never been in jail before. I prayed with them when I could, tried to talk them through it.”

The guards, Barnett said, go out of their way to make life harder for the detainees. “It is purposeful and deliberate collusion, to make every facet of your existence miserable,” Barnett said. This includes instances of physical abuse; guards slammed Barnett’s face into the concrete floor at one point. After confronting the guards for not following prison rules—Barnett read the Department of Corrections inmate handbook when he arrived—and accusing one guard of sexual harassment, Barnett was placed in the D.C. prison’s general population as punishment.

Another detainee, Barnett recounted, was attacked in his cell in the middle of the night, handcuffed and beaten “senseless,” Barnett said. He suffered extensive injuries. “They damn near killed him.” Another young man with evident emotional issues was heavily maced by guards one night when he had some type of breakdown. “I shouted at them to leave him alone.”

Religious services are not allowed so Barnett and a few others organized a Sunday morning service. The guards, Barnett said, were “nasty and insulting” about their attempts to practice their religion. “We couldn’t even talk about God.” There is “no doubt” in Barnett’s mind that the January 6 detainees are treated differently because of their political views.

The prison’s library, the guards told the detainees, is closed. Access to law books and other reading material is nonexistent, Barnett said. The detainees started their own newsletter with paper and pencils purchased through the commissary. They also sing the National Anthem at 7:00 each night to lift morale. “These guys are patriots.”

Attorney-client privilege also is nonexistent, Barnett and his lawyers, Joseph McBride and Steven Metcalf, told me. There is no privacy during discussions and video calls can take up to two weeks to schedule.

Barnett’s experience supports descriptions by other inmates; earlier this month, I wrote about Jacob Lang, who has been imprisoned in the D.C. jail since his arrest in January. Lang told his parents the detainees are “being abused mentally, physically, socially, emotionally, legally, and spiritually.”

I asked Barnett what he would like to tell the American people about what’s happening. “Very simple, pray for the guys who are still in there,” he said. “They’re not working and have a family to support. Help pay their bills.”

Barnett and his lawyers will soon launch a website where people can donate and learn more about his experiences and follow his trial. (GoFundMe, his lawyer said, won’t permit accounts to help raise money for January 6 defendants.)

“Freedom is not free,” Barnett said.

Unfortunately for dozens of political prisoners held hostage by their own government, freedom appears to be a long way off.