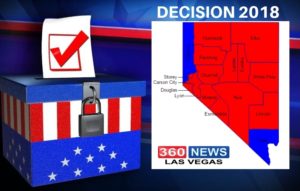 If there is any silver lining to see in the results of the midterm elections for Republicans this last week it may be found in voters responses to the Ballot Questions. By a significant majority, Nevadans voted down 2 taxes and supported more law and order. Even Question 5, the DMV voted opt out law, was sold to the public using Veterans and conservative messaging.

Question 1, known as Marcy’s Law, passed with 61% of the vote. After the public heard stories how victims of violent crimes were victimized by the criminal justice system over and over, even with existing laws in place, the public showed overwhelming support for more concrete law and order. Marcy’s law gives the victims a voice in the system and legal standing to go into court and ask a judge to hold a convicted criminal accountable if he/she violates probation and parole including restraining orders.

Shall the Nevada Constitution be amended to: (1) remove existing provisions that require the Legislature to provide certain statutory rights for crime victims; and (2) adopt in their place certain expressly stated constitutional rights that crime victims may assert throughout the criminal or juvenile justice process?

Question 2, also known as the tampon tax exemption, passed with 56% of the total vote. The new law bans sales taxes on feminine hygiene products. Even though the law was dressed up a gender quality bill, it proves there’s a limit, even for socialist democrats on how far they can go to tax us on products we need for everyday living. So Republicans’ take away is from now on they just need to frame every tax cut as a pro feminist law to win.

Shall the Sales and Use Tax Act of 1955 be amended to provide an exemption from the taxes imposed by this Act on the gross receipts from the sale and the storage, use or other consumption of feminine hygiene products?

Question 3 was the proposal to breakup NV Energy which went down in flames. 67% of Nevada voters rejected breaking up NV Energy. The ballot initiative was funded by a handful of big companies seeking to exit NV Energy without paying large exit fees. The energy giant owned by Berkshire Hathaway Energy pitted Casino and Switch billionaires verse billionaire Warren Buffett. But what’s interesting about this, is NV energy appealed to voters by claiming Question 3 would raise energy prices on small businesses hurting the economy proving once again that everyone votes their own interests in the end even, diehard free market Libertarians and Conservatives.

Shall Article 1 of the Nevada Constitution be amended to require the Legislature to provide by law for the establishment of an open, competitive retail electric energy market that prohibits the granting of monopolies and exclusive franchises for the generation of electricity?

Question 4, another anti-tax ballot initiative passed with a landslide 67% of Nevada voters. There’s nothing liberal about cutting taxes. Voters spoke loud and clear that there are limits to taxes.

Shall Article 10 of the Nevada Constitution be amended to require the Legislature to provide by law for the exemption of durable medical equipment, oxygen delivery equipment, and mobility enhancing equipment prescribed for use by a licensed health care provider from any tax upon the sale, storage, use, or consumption of tangible personal property?

Even Question 5 passed with 59%, which opts everyone in with a Driver’s license to register to vote even those with green Cards and ex-felons was marketed using Veterans and small business people in their ads. The state of Nevada is still a conservative leaning state where voters support laws when presented as pro-veterans and pro-business even when they are the complete opposite like Question 5.

Shall Chapter 293 of the Nevada Revised Statutes be amended to establish a system that will automatically register an eligible person to vote, or update that person’s existing Nevada voter registration information, at the time the person applies to the Nevada Department of Motor Vehicles for the issuance or renewal of any type of driver’s license or identification card, or makes a request to change the address on such a license or identification card, unless the person affirmatively declines in writing?

Feel good, politically correct, Questions 6 passed with 59% requiring 50% of our energy come from more expensive sources like solar and wind. Get ready to pay more for you energy bill. Get ready to pay for your neighbor’s roof top solar panels.

Shall Article 4 of the Nevada Constitution be amended to require, beginning in calendar year 2022, that all providers of electric utility services who sell electricity to retail customers for consumption in Nevada generate or acquire incrementally larger percentages of electricity from renewable energy resources so that by calendar year 2030 not less than 50 percent of the total amount of electricity sold by each provider to its retail customers in Nevada comes from renewable energy resources?

When one looks across the nonpartisan ballot question results, it’s clear that Nevadans voted against taxes, against destabilizing NV Energy, and with veterans and small businesses. So when voters rejected many Republican candidates they also rejected higher taxes that hurt businesses. The Nevada Republican Party has zero credibility with Nevada voters on the their core issues of lower taxes and less regulations after the Sandoval and Roberson years, especially after Laxalt, in desperation, called for $500 million in new Education funding a week before early voting. 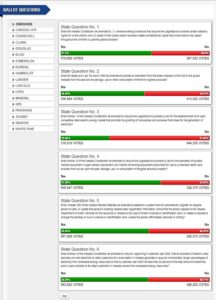