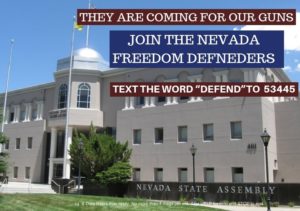 Today, the Nevada legislature opens for its 2019 session with all three branches controlled by Democrats. Last year Nevada Democrats swept the Governor’s race, the State Assembly and Senate and are positioned to govern almost unopposed. Republicans hold a one vote margin in the State Senate to hold off any NEW taxes. But Democrats only need a simple majority to pass sweeping new gun laws. A new group called the Nevada Freedom Defenders are already starting to raise money to prepare lawsuits to challenge new Democrat gun control laws.

Democrats are proposing to enforce Question 1, which would go into effect in one year, the gun background check ballot initiative that past in 2016. The Bloomberg backed ballot question was so poorly written that the law was declared unenforceable. The law was unenforceable because the law required private gun owners to go to a gun store and have them run a background check directly thru the FBI’s system rather than Nevada’s Department of Public Safety as gun stores are now required to do for new gun purchases. But the feds refused to conduct the background checks and the implementation stalled. Question 1 passed by less than 1% with only a 10,000 vote margin in 2016.

The big question going forward is how will Democrats change the law so its enforceable? The only possible way to devise a lawful process is if the background checks are conducted by Nevada Department of Public Safety free of charge, skipping the gun stores. We have seen in California how gun stores charge $100 plus to conduct private gun transfers, if they do them at all. Adding any cost to the transfers would be considered a taking of private property and subject to a lawsuit according to firearms experts.

The real issue that has Nevada Gun owners up in arms is the proposed Red Flag Gun laws that allow a family member, including ex-wife, social worker or law enforcement to seek an order from a judge to seize someone’s guns without any criminal conviction or actual medical diagnoses. Essentially a judge could order your guns seized based solely on hearsay. And the gun owner is not provided a free lawyer or any damages if the court gets it wrong. In fact the gun owner could have his guns ordered seized without ever appearing in court. The new group, The Nevada Freedom Defenders is vowing to fight, in court, any new gun laws including the Red Flag Gun laws. According to inside sources, the Nevada Freedom Defenders are also preparing lawsuits against Nevada Democrat leaders over their backing of gun laws.

If you want to learn more about Nevada Freedom Defenders or get regular updates about their efforts text the word “Defend” to 53445.