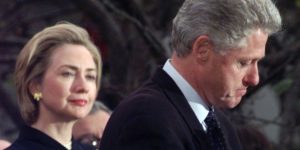 Today all the usual suspects are coming out and criticizing Donald Trump for crude comments he made 10 years ago off mic between himself and a friend.

First thing is, as long as those same people who are “Denouncing” Trump, are also willing to include Bill and Hillary for their crude comments and behavior towards all the women Bill has allegedly assaulted and Hillary has demonized for daring to complain, then I’m ok with it. But of course they all seem to be forgetting Bill and Hillary’s treatment of women over the years. Must have slipped their minds. Remember in 1995 when Bill Clinton was caught lying to Congress and a Special prosecutor regarding his sexual affairs and the left said “it was just about sex, who cares??”

Second, all those people criticising Donald Trump for talking like men sometimes do in private between each other and let’s not forget all the women who we know talk graphically with each other about sex in private, stop the phony outrage. You are just throwing rocks in glass houses.

Donald Trump is an outspoken, crude Alpha male. And frankly most of the Presidents have been the same behind closed doors. Lyndon Johnson was far more vulgar while President in the White House and of course Teddy Roosevelt was another crude outspoken New Yorker. The real issue is, the liberal media browbeating our nation down into a bunch of wimpy sensitive politically correct weaklings who can’t handle locker room talk.

One thing I do know is a real man like Donald Trump would not have left dead American bodies on the tarmac to rot in Benghazi. An alpha male like Trump would have sent in the Marines to crush the terrorists who dared attack a US Ambassador.

Real women like tough real men like Trump. And only real men can defend America. We have a wimpy sensitive politically correct weakling in the White House currently and look where is has gotten us.