President Trump signed an executive order in January directing Immigration and Customs Enforcement, or ICE, to issue weekly ICE reports showing the public which police departments are doing the worst job of turning over criminal illegal aliens with detainer holds. Well Clark County, Las Vegas Metro Police had the worst record in the country according to the report.

According to the newly issued ICE report for January 28, 2017 thru February 3, 2017, Clark County’s Sheriff Lombardo refused to turn over 51 criminal illegal aliens with ICE detainer holds, the number 1 offender in the country.

CLIP OF THE ICE REPORT ISSUES THIS WEEK 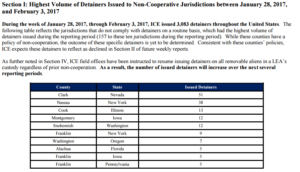 According to other news sources, Lombardo disputed those numbers claiming he has turned over a new leaf and is now working with ICE. But his words seem to be in conflict with his action according to the new ICE report.