ALL OF THE MS-13 GUNS SEIZED WERE STOLEN. NO BACKGROUND CHECKS?

ALL OF THE MS-13 GUNS SEIZED WERE STOLEN. NO BACKGROUND CHECKS? 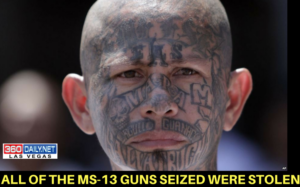 On Monday, after hiding some ten MS-13 murders from the public over the past year, and after Laura Loomer and 360Daily.net exposed those murders over the weekend; Lombardo held a CYA election year press conference. In presser, Lombardo admitted that yes there were at least ten violent gang murders that they know of, that’s ten Vegas citizens killed by illegal alien gang bangers he concealed from the public over the last year.

It was confirmed yesterday by Laura Loomer, that all of the MS13 killers were illegal aliens with Federal Deportation orders pending.

It was also discovered this week that Metro seized eighteen firearms including an AR-15 semi-automatic rifle, shotguns and semi-automatic pistols from the violent MS-13 illegal alien gang bangers. All the weapons were stolen. Instead of going through the background system, the criminal aliens just stole the guns by burglarizing homes.

360Daily.net reported the huge spike in home break-ins in 2016 resulting in the theft of hundreds of firearms. Homeowners have been complaining for the last few years that Metro has been unresponsive failing to follow up and investigate home burglaries. More than 3,000 firearms were stolen in 2016 in home burglaries in Clark County alone.

There are an estimated 20,000 gang members in Clark County.