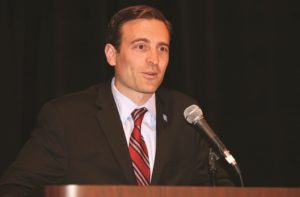 Last night at the Clark County GOP’s annual Lincoln dinner, Nevada’s Attorney General Adam Laxalt was the keynote speaker. What was obvious to everyone in the room was Laxalt has emerged clearly as the new leader of a fractured party in need of fresh blood. 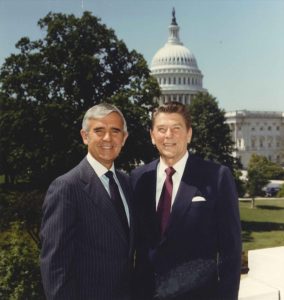 Adam Laxalt is the son of former U.S. Senator Pete Domenici (R-NM) and Michelle Laxalt, the daughter of former Nevada Governor and Senator Paul Laxalt, so he’s Nevada royalty. AG Laxalt also served in Iraq as a US Soldier in the JAG corps so as one of the 300,000 veterans in Nevada he has an edge over most competitors.

Laxalt spoke about President Trump in glowing praise after attending the inauguration in Washington D.C. last week, unlike those other failed Republicans last year who committed political suicide taking the entire Nevada GOP down with them. This crowd needed some red meat after dealing with RINO’s for the past few years who broke every promise they ever made to the base. But Laxalt has been a man of action and very few words. He took on President Obama’s executive amnesty in court, winning, he took on Bloomberg’s Question 1, winning and he has stood up to Gov. Sandoval on numerous issues. Laxalt also cleaned up a mess in the AG’s office of backlogged rape kits and numerous other problems following Catherine Cortez Masto’s reign, who politicized and weaponized the AG’s office against Harry Reid’s political rivals.

Laxalt spoke with the conviction and confidence of a man running for Governor and its his for the taking with no one else in the party with the credits, cash and name to compete. While there are still questions concerning his policy positions on a host of issues like taxes, Adam Laxalt is positioned to be the GOP nominee for governor and a rising star.

But Laxalt will have to take on the likely Democrat leader of the Clark County Commission, Steve Sisolak, who has a mountain of cash in the bank and a history of attracting moderate Republican support. Laxalt is already behind the eight ball with 65,000 fewer registered Republicans statewide.

Laxalt has won statewide once already beating super candidate Ross Miller who won statewide twice before and had the Miller name and money behind him. And Southern Nevada Democrats like Dina Titus and Shelley Berkley have struggled to overcome the distrust many Northern Nevadans have for politicians from Las Vegas, especially Democrats.

Laxalt has led in the AG’s office as a fierce conservative, so risking losing the AG’s seat to a Democrat is intolerable to many Republicans. Laxalt has been a counterweight to Governor Sandoval, who might as well be a Democrat. Laxalt is a sure win for reelection as AG but he’s 50/50 to win Govenor as of today.

Who would run in his place for AG? Many are speculating Wesley Duncan would step up to run for AG. Wesley Duncan was an one term Assemblyman re-elected to his second term before being tapped by Laxalt in 2014 to lead the AG’s office. Duncan is super smart and capable but unproven as a statewide candidate capable of drawing big money and big votes. Clark County DA Steve Wolfson is the likely Democratic AG Candidate who’s got big Bloomberg money behind him and has been a political fixture in Clark County for decades.

But Congressman Amodei has also recently expressed interest in running for AG. Amodei recently appeared on Veterans in Politics’ weekly radio show in Las Vegas. Amodei would be a formidable candidate for AG with tons of cash and name ID in the North. Wolfsen would have to drag the legally flawed Question 1, which he fully supported, across the State.

But if Laxalt runs for Governor, we risk losing both the AG’s office and the Governorship, turning Nevada as blue as California.