AFTER NV AG LAXALT’S BRUTAL WEEK, IS HE STILL THE BEST GUY FOR NV GOVERNOR IN 2018?

AFTER NV AG LAXALT’S BRUTAL WEEK, IS HE STILL THE BEST GUY FOR NV GOVERNOR IN 2018? 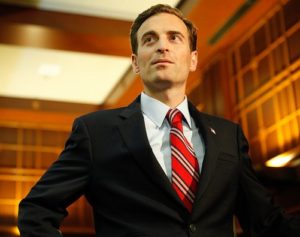 Last night in Carson City, the Democrats shot a round across the bow of Nevada Attorney General Adam Laxalt and the Republican Party. The Democrats held a dramatic hearing in the State Capital last night after it was discovered Nevada Gaming Control Board Chairman A.G. Burnett secretly recorded Nevada Attorney General Adam Laxalt lobbying him to take action against a plaintiff in a lawsuit against Sands Corp. owned by super donor Sheldon Adelson. AG Laxalt is considered the top candidate currently on next year’s Republican ticket for Nevada Governor.

According to Burnett, AG Laxalt wanted the Gaming Control Board to jump into a legal battle to help Sheldon Adelson. According to reports, Burnett took the recording to the FBI, but federal authorities found Laxalt committed no criminal wrongdoing. Now the Democrats are asking for an ethics probe in the State Assembly and to replace Laxalt with a special counsel at the NV Gaming Control Board due to Burnett’s recording. AG Laxalt denies wrongdoing. Laxalt said “his actions were part of the job of Attorney General. He said Democrats calling for the hearing are engaging in a partisan stunt.”

Nevada Treasurer Dan Schwartz, who was caught lying about his new proposed Nevada income tax, has said he will challenge Adam Laxalt and use the tapes against him in the primary.

The Democrats have their play book out for all of us to see now. They will run the secret tape in TV ads in next year’s gubernatorial election against Adam Laxalt.

So the question is, can Adam Laxalt overcome the audio tapes and negative media for the next year and half? Should the Republicans start making a plan B?