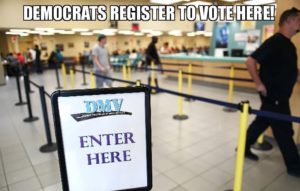 Last month, Nevada Secretary of State Barbara Cegavske issued a letter to the DMV Director to cease and desist registering non-citizens to vote. Cegavske went on to accuse the DMV of facilitating voter fraud. Cegavske, in the letter, accused DMV workers of knowingly and illegally registering green card holders to vote. Green card holders are non-citizens in the country legally with a visa. Only U.S. citizens are allowed to vote in U.S. elections.

Now sources inside both the DMV and the Nevada Secretary of State’s office confirmed that over 88% of the people registered to vote at the DMV were registered as Democrats. What’s more, over 82% of those DMV employees responsible for handling voter registration paperwork are Democrats themselves, according to those same inside sources. According to sources, they identified the names of the staffers and checked their voter registrations on the elections department public website and the found that 82% of those employees checked were in fact registered Democrats.

According to the most recent April 2017 Nevada Secretary of State report, Democrats now have 581,133 registered voters compared to 489,222 active voters registered as Republicans, a 3.5% increase in just the last 6 months.

This fact may account for why Democrats in the State Legislature are pushing so hard for laws to increase DMV voter registration programs.