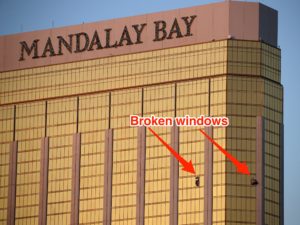 Less than twenty-four hours after a shocking, military-style ambush, using AUTOMATIC weapons, from the 32 floor, 64 year old retiree, Stephen Paddock, was named by Sheriff Lombardo as the supposed shooter of 515 people. Paddock allegedly shot himself according to reports.

I’m the furthest thing from a conspiracy type, BUT is there any record in the history of America, or the world, of a man in his 60’s, with literally no criminal record besides a parking ticket, all of a sudden planning and executing an attacking like this last night? As a former military policeman, I know what it took for Paddock to pull off the attack. He had the perfect room, with the high ground, very advanced weapons, and in the end, he had 72 minutes to keep shooting until Metro Police breached his room.

ISIS has insisted several times today that Paddock had converted to Islam four months ago, but the FBI has said there is no evidence that’s true. Paddock’s girlfriend, 62-year-old Marilou Danley, is an Australian citizen and of Indonesian descent. Indonesia also has a larger Muslim population than any other country in the world, with approximately 202.9 million identifying themselves as Muslim.

According to Lombardo, Paddock checked into his suite on Thursday, Sept 28, 2017.

Did he have room service over those 3 days?

How did he pay for the room?

Did any police calls come from inside the Mandalay Bay Hotel, either from security or other guests in the adjacent room below or above?

How did he know which room to rent?

He clearly was targeting the concert so this was not a snap decision. Did anyone help him plan and pay for the attack?

Why did his Indonesian girlfriend leave the country before the attack?

I am speculating that the attack was part of a cluster of attacks that day, including the attacks in France and Canada. The story we’re getting is a cover up to misdirect the public away from a possible multi-nation coordinated Muslim attack. The FBI is still controlled by Obama Leftist holdovers who certainly have tried to cover up or downplay radical Muslim activity in the U.S. and Europe over recent years.

ISIS has a recent history in Manchester and in France of attacking concerts goers. This fits a pattern.

After watching our government and media lie nonstop about so many things for the past 10 plus years, we should not take their word at face value here. We must use common sense and critical thinking to analyze the events and facts surrounding the terrorist attack in Las Vegas last night. Real people died we know that. But the question is; is our government desperate to cover it up because it was an ISIS plot they failed to stop?