WAS THIS AN ACT OF WAR? WOULD YOU BE OK WITH KOREAN MISSILES FLYOVER LAS VEGAS?

WAS THIS AN ACT OF WAR? WOULD YOU BE OK WITH N.KOREAN MISSILES FLYOVER LAS VEGAS? 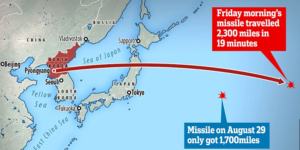 Japan is an ally and we have significant military bases and interests there. Now I am not advocating, at this time, to strike North Korea, but we should deny them any further missile flights by shooting them down the second they enter international airspace. So they can launch anything they want as long as it doesn’t leave North Korean Airspace. In essence, I would form a missile blockade and I may form a naval blockade as well to prevent any missiles or nuclear weapons from leaving their country.

The last time we went to war with North Korean, over 50,000 Americans lost their lives. So that is a terrible option. And North Korea knows this and is trying to leverage the threat of war to get more international payoffs.

We cannot accept missiles flying over our country or that of our allies and partners. We don’t want war with North Korea, but the efforts to buy off countries in hopes that they will behave better works about as well as giving my dog a treat if he doesn’t poop in my living room.