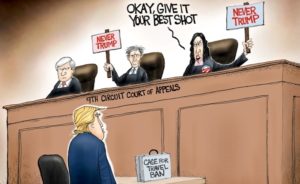 After witnessing the 9th Circuit of Appeals illegally block President Trump’s Immigration travel pause back in January, Congress and the new President are about to cut the power out of the 9th Circuit Court of Appeals once and for all. The President issued a pause in travel and visas from seven countries Congress declared state sponsors of terrorism, so his administration could formulate a vetting process to prevent ISIS types from sneaking into the US as they did in Europe killing hundreds of civilians there.

The 9th Circuit of Appeals, which has been overturned by the Supreme Court 77% of the time, declared in their brief blocking President Trump’s executive order, that a foreigner has a right under the U.S. Constitution to due process i.e. a hearing to come into the US. So according to the 9th Circuit, some guy living in a cave in Afghanistan has rights under the US Constitution to immigrate here.  But since the Immigration and Nationality Act of 1952 the President has the authority to determine who can come and who cannot enter the US.

The 9th Circuit also ruled that an individual has no right to carry a firearm to protect themselves even in their home. They also ruled that the City of San Francisco can require people to lock up their firearms in a safe in their homes even if they don’t have children. They ruled the City of San Diego has no duty to issue a Conceal Carry permit to lawful gun owners who apply and pass background checks.

Under the US Constitution, Congress has the sole authority to determine the make up and jurisdiction of the entire court system, including the Supreme Court.

The Judicial Administration and Improvement Act of 2017 would create a new 12th Circuit Court of Appeals covering Alaska, Arizona, Idaho, Montana, Nevada and Washington state. The states remaining in the new 9th Circuit would include California, Oregon, Hawaii and the territories of Guam and the Northern Mariana Islands.

The Author of the bill Senator Flake said in a statement “By bringing Arizona, Alaska, Idaho, Montana, Nevada and Washington together under a 12th “Mountain Circuit,” we will alleviate the 9th Circuit’s enormous caseload and create two smaller appellate courts; where a single, dysfunctional court stood before, we will establish a stronger one — and with stronger local, regional and cultural ties,” he went on to say “A fair and functioning judiciary is one of the pillars upon which our democracy rests. When we see that pillar begin to erode, elected officials have a responsibility to act. That’s what we’re doing.”

Even Senator John McCain is now supporting breaking up the 9th Circuit. But this bill will have a profound impact on Nevada. If a new Federal Appeals Court is established, President Trump will have the full authority, with the Republican Senate, to appoint the new Judges and create a counter weight to the 9th Circuit. Legal experts expect a flurry of lawsuits to test the new Court of Appeals seeking new rulings challenging and possibly overturning previous 9th Circuit rulings following it inception.