A Metro Officer spoke with NEWSMAX TV LAS VEGAS, on condition of anonymity, responding to our story about Clark County being one of the worst counties in the country, according to ICE, for failing to turn over criminal illegal aliens to the Feds.

According to the Metro Officer:

“The Obama Administration refuses to pick up illegal aliens Metro Police arrest here in Clark County. So the only choice Metro has is to either hold them in lock up or allow them to post bail and hope they return to court.”

According to prosecutors, they show up in court without any sort of ID and no one knows who they are or where they are from. The problem is, many of those arrested are ghosts who don’t appear in any US databases. So, releasing them poses a high risk of them skipping out and going back to their country of origin to avoid prosecution. According to Fair, a Washington DC think tank that tracks illegal alien costs, Nevada is spending over $1.2 Billion dollars annually for illegal aliens. 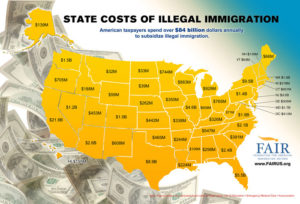