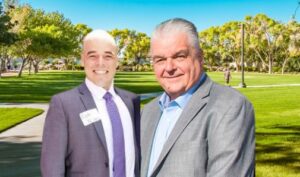 DIDS is working to create a pipeline program through the Boyd School of Law at UNLV, to bring more qualified indigent defense attorneys into the rural areas.

Certainly, at the time, Telles, a lawyer and graduate of the Boyd Law School, was a reasonable choice.

But, shortly thereafter, on February 29, 2020, Telles was arrested and charged with domestic battery for allegedly beating his wife, and resisting arrest.

Telles was convicted Sept. 30, 2020 of Domestic Violence and sentenced to an anger management class, ordered to pay a fine, and given one year of probation.  Despite this, not one local news outlet reported the arrest or conviction of Democrat Robert Telles before, during, or after his run for reelection as Clark County Public Administrator in 2022.

Only now, that Telles has been charged in the murder of investigative journalist Jeff German, did Channel 13 finally report the DV conviction.

Governor Sisolak’s entire campaign for reelection, so far, has been about protecting women’s right to an abortion. Yet after Telles’ DV conviction, Sisolak never asked him to resign.

360 News served the Board of Indigents with a Public Records request for all documents following Telle’s domestic violence conviction.