SISOLAK RAKED IN MILLIONS DURING PANDEMIC

SISOLAK RAKED IN MILLIONS DURING PANDEMIC 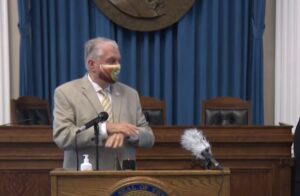 The Pandemic was very good for Gov. Sisolak’s bottom line as he raised millions for his reelection campaign in 2020. According to the Nevada Secretary of State’s C&E reports, Gov. Sisolak raised over $2.4 million in 2020. That’s a million more than he raised in 2019.

Businesses desperate for CV19 relief, like casinos, gave tons of cash to the Governor in 2020. Sisolak also capitalized on the two failed recalls in 2020 actively fundraising against the recalls. The two failed recalls were launched by frustrated Nevadans and amateur activists who barely scrapped 64,000 signatures out of the 240K plus needed to recall him.

With Churches shut down, landlords at his mercy, businesses large and small begging him to reopen, 800K folks unemployed and with absolute power over every aspect of human life, Sisolak’s Emergency powers have made him the most powerful Governor in the history of Nevada.

Courts bowed to him, refusing to challenge his authority to shut bars for a second time in August. Even as his CV19 containment policies seemingly failed as deaths soared in late November and December, Sisolak raised historic levels of money for a mid-term governor. Governor Sisolak is now sitting on over $4.5 million in the bank, according to public finance reports.

As of today, there are no Republican challengers, even on the horizon, with the public support nor cash to mount a serious campaign against Sisolak. His rivals might actually come from within the Democrat party who are unhappy with his leadership.