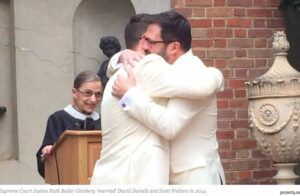 U.S. Supreme Court Ruth Bader Ginsberg has been moonlighting from her gig as a Justice on the high court by performing A-list Gay marriages.  According to news reports, Ginsberg has performed marriages for several prominent gay couples recently, including Opera countertenor David Daniels, 52, and conductor Scott Walters, 37.

No word on her marriage fees. Ginsberg is thought of as the most liberal member of the court and the most likely to retire due to mounting medical issues in recent years. Her seat is widely seen as the pickup for Republicans if they can hold the Senate and get President Trump reelected next year.