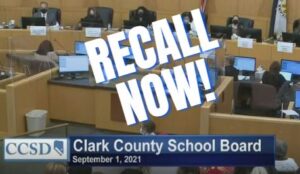 Even before the Clark County School Board Trustees voted to mandate CV19 vaccines for all of their 54,000 employees, the mask mandate for kids was already triggering efforts to start a recall effort called Parents First.

Clark County School Board Trustees manage a $2. 8 Billion annual budget, and set school educational polices including CRT. It’s actually one of the most important positions in the state of Nevada. Dems launder a ton of money through the CCSD to their supporters and candidates with juicy no bid contracts to Unions and cushy 6 figure salaries.

A high power group of parents have formed a Political Action Committee that will soon be announced. Political Consultants have been hired. Now they need candidates and volunteers and money.