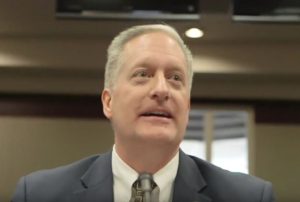 Michael Roberson backed Nevada State Senator Kieth Pickard said on Facebook today that “I support background checks for firearms purchases. We already do them.” Sen. Pickard clearly hasn’t read the Nevada State Constitution Section 11 and Section 20. A family lawyer by trade, Pickard leans RINO as he sells out the Republican State Party by giving support to the concept that law abiding citizens should give up their gun rights to make liberal feel better. Outrageous!

Call RINO Republican State Senator Keith Pickard and demand that he defends gun our rights. Call him now and demand he holds the line. ((775) 684-1481 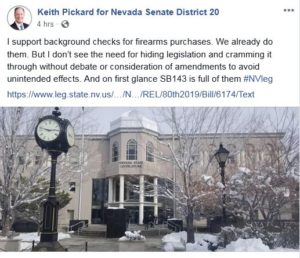 As the Nevada legislature, led by a Democrat majority, rushes to pass new laws limiting gun rights in Nevada this Tuesday, all too often gun owners only cite the 2nd Amendment of the U.S. Constitution, which liberal courts have bastardized over the past two and half centuries, forgetting that just over 155 years ago the State of Nevada confirmed the right of citizens to keep and bear arms.

Liberals have argued for years that the 2nd Amendment of the U.S. Constitution dose not really say that citizens had a right to private gun ownership. They argue the 2nd Amendment was written to support and allow local State run militias to retian firearms. Well the good people who drafted the Nevada State Constitution made it very clear in our Constitution stating in Article 1, section 11 “Every citizen has the right to keep and bear arms for security and defense, for lawful hunting and recreational use and for other lawful purposes.”

DIRECTLY FROM THE NEVADA STATE CONSTITUTION

The Nevada constitution was framed by a convention of delegates chosen by the people. The convention met at Carson City on July 4, 1864, and adjourned on July 28 of the same year. On the 1st Wednesday of September 1864, the constitution was approved by the vote of the people of the Territory of Nevada, and on October 31, 1864, President Lincoln proclaimed that the State of Nevada was admitted into the Union on an equal footing with the original states.

1.  Every citizen has the right to keep and bear arms for security and defense, for lawful hunting and recreational use and for other lawful purposes.

Sec: 20.  Rights retained by people.  This enumeration of rights shall not be construed to impair or deny others retained by the people.