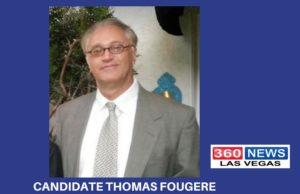 Republican Candidate for Clark County Public Administrator Aaron Manfredi announced today that he is filing a defamation and slander lawsuit against his opponent Thomas Fougere, numerous people and entities for coordinating a misinformation campaign against him in an effort to damage his reputation and destroy his candidacy for Public Administrator.

In 2015, Manfredi claims he was falsely accused of Domestic Violence with strangulation by a woman he dated. A jury found him not guilty. And in 2012 while Manfredi was working as a Juvenile Probation Officer for Clark County, he claims he was also falsely accused by a 16 year old female prisoner of sexual misconduct. Manfredi plead guilty to a Gross Misdemeanor for disorderly conduct in that case.

Manfredi said “Thomas Fougere and a woman named Debby Forbes (Reynolds) have continued to slander and defame my reputation online in an effort to win a new election after I won the first election. In America, we must preserve our basic principle of innocent until proven guilty. If elected, as a public official I pledge to stand up for all the citizens of Clark County and protect seniors against fraud and abuse.”

The two Republican candidates for Clark County Public Administrator are fighting out a 2nd election after the first election held on June 12, 2018 was not certificated because allegedly numerous people voted twice. So now a re-vote is being held using mail in ballots to all 56,000 voters. The ballots have already gone out to voters and are due back to the Clark County Elections department by July 17, 2018 by 7pm.

360 reached out to Mr. Fougere for comment but never heard back from him.

No lawsuit has been filed to our knowledge against Mr. Thomas Fougere. Mr. Aaron Manfredi stated that he is in the process filing a lawsuit against Mr. Fougere.