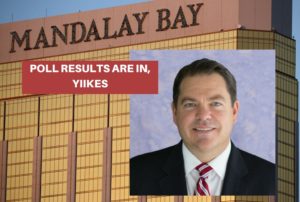 After MGM thoroughly disgusted the nation by actually suing some 1,000 Route 91 Vegas Mass Shooting victims in Federal court, 360 News posted an online poll to ask if Republican Lt. Governor Candidate Michael Roberson should return the $20K campaign donation he accepted this year. We choose Roberson, because he accepted more money from MGM than any other Republican this year, according to NVSOS reporting.