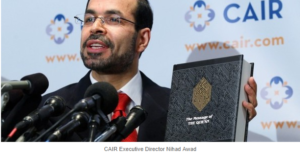 This week MGM CEO Jim Murren said MGM will match any donations his employees make to several “Civil Rights” groups including the Jewish rights group The Anti-Defamation League and CAIR The Council on American-Islamic Relations.

But the ADL has accused CAIR of supporting terrorism and so did the Obama DOJ and FBI. The Obama administration considered CAIR to radical to work with in 2013.

CAIR’s anti-Israel agenda dates back to its founding by leaders of the Islamic Association for Palestine (IAP), a Hamas affiliated anti-Semitic propaganda organization. While CAIR has denounced specific acts of terrorism in the U.S. and abroad, for many years it refused to unequivocally condemn Palestinian terror organizations and Hezbollah by name, which the U.S. and the international community have condemned and isolated.

In a 2004 interview with Al Jazeera, Nihad Awad said, “If they want us to condemn a liberation movement inside Palestine or inside Lebanon they should condemn Israel tens of times on all levels at all times, and we will not condemn any organization.”

CAIR’s more recent criticism on Hezbollah began only when the terrorist organization’s stopped focusing solely on Israel and began engaging in military operations against Sunni Muslim fighters in Syria and Iraq. Hussam Ayloush, who heads the Los Angeles office of CAIR, called Hezbollah leader Hassan Nasrallah “Satanic” in a post on Facebook in June 2013.

“Until we resolve whether there continues to be a connection between CAIR or its executives and Hamas, the FBI does not view CAIR as an appropriate liaison partner,” the letter read. In September 2013, the U.S. Department of Justice issued a review of the FBI’s interactions with CAIR to reaffirm the FBI policy prohibiting non-investigative cooperation with the group.