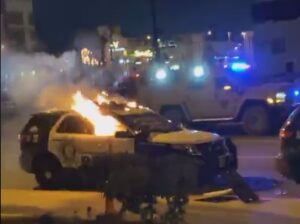 Obama and Harry Reid appointed Chief U.S. District Judge Miranda Du released the three men on bail and ordered them not to participate in protests for a month. Tyree Walker, 23, Devarian Haynes, 23, and Ricardo Densmore, 24 were charged with arson and conspiracy charges for burning a Las Vegas Metro Police SUV.

Compare this to the Bundys who were jailed for 2 years without bail while they awaited trial for simply protesting the Feds confiscating their cattle. Two clear standards of justice are on display.

According to the criminal complaint:

“On May 31, 2020, a video located by LVMPD investigators captured the events. The video begins as an individual, later identified by law enforcement through social media photos and accounts as defendant Ricardo Densmore, recording the incident, approached two males, later identified by law enforcement through social media photos and accounts as defendants Tyree Walker and Devarian Haynes. As Walker poured a liquid from the red gas can onto a white object, the defendants can be heard discussing pouring the liquid directly on the patrol vvehicles. Walker approached one of the patrol vehicles but quickly moved to the patrol vehicle parked directly behind the first vehicle, where he was joined by Haynes carrying the gas can. Throught a broken or missing front passenger side window, Walker ignited the white object using a butane lighter. Walker stood immediately adjacent while Haynes poured liquid from the gas can through the broken or missing window into the vehicle. As the fire ignited, the sound of a siren from an approaching LVMPD vehicle can be heard on the video. Walker dropped the unknown white object, which was on fire, into the patrol vehicle. Haynes dropped the gas can inside the patrol vehicle. The defendants fled on foot as the video immediately ends. Agitators who are using the camouflage of lawful protests to commit violence against law enforcement will be prosecuted,” Trutanich said. “Violence places protesters, first responders, and bystanders in danger, and steals focus away from the messages that peaceful protesters are striving to deliver.”