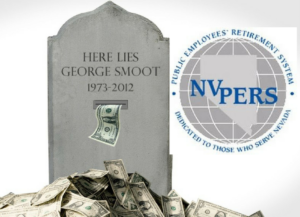 Under Nevada law, county government records offices are forbidden from sharing death certificates with the NVPERS (Public Employees’ Retirement System of NV) which means NVPERS has been paying automatically into the bank accounts of deceased retirees for years.

According to the Clark County Health District, they are strictly forbidden from sharing their records of the deceased with anyone except the family. This means NVPERS has no way to find out if retirees are deceased. Nevada has, on average, 21,000 people each year pass away.

Based on the average death rate for Nevada, 800 of those NVPERS pass away each year. That adds up to around $40 million paid out each year for deceased retirees. But it can take years for NVPERS to discover if a retiree passed away unless the family reports the daeth to NVPERS.

This scandal is not unique to Nevada. Recently in the news, the Wilmington Treasurer’s Office paid the pension of a woman for more than 20 years after she died totaling almost $73,000.

When 360Daily.net contacted NVPERS, they confirmed the problem and said that they have several collection actions currently pending trying to recover funds from family members who accept the payouts from NVPERS to their deceased relatives for years.