NV VOTER FRAUD: WHO IS THE RIGHTFUL GOVERNOR OF NEVADA?

NV VOTER FRAUD: WHO IS THE RIGHTFUL GOVERNOR OF NEVADA? 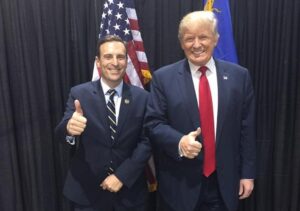 Is Adam Laxalt the rightful Governor of Nevada or is Steve Sisolak? Is Nevada Secretary of State Barbara Cegavske really the only Republican who won statewide in 2018? After all, she controls the Dominion Election System Software in Nevada.

In 2018, how did Brent Jones lose in Nye County to Michael Roberson in the Republican primary Lt. Governor’s race even though Dennis Hoff won by a landslide? No way Rural Republicans voted for both Hoff and Roberson.

In 2010, then Secretary of State Ross Miller, declared himself the winner of the election five minutes after the poles closed, even-though not a single ballot was allowed to be counted until the polls closed.

This year, April Becker was leading the corrupt Senate Majority leader who passed the mail in ballot scheme in the dead of night, for days after the election, until one day she wasn’t.

The overwhelming voter fraud described by President Trump’s Nevada Legal team wasn’t limited to 2020. The same folks running the sham election of 2020 have been in place for years. Joe Gloria, who hid in his office after locking the doors at the Clark County Elections Department to avoid a subpoena by the Trump legal team, has been in his position for the last decade.

The same corrupt local media has been protecting Nevada politicians.

Dominion Software has been in place since 2012.

Folks engaged in politics want to, need to believe in the system. Even today, many national Conservative radio talk show hosts are still supporting the election system in Georgia’s run off instead of calling for the corrupt Republican Governor and Secretary of State to resign.

But facts are stubborn things.

The facts as presented, with names and addresses, by the Trump legal team in Nevada last week in Court:

15k votes from vacant lots
19k votes from out of state
42k double votes
1,500 dead voters
8k votes from non-citizens
.
Yet Nevada District Court Judge Russell ruled there was insufficient evidence of fraud to overturn the election. BTW he was elected in the same system that is now in doubt.
.
The scale of the voter fraud, 120k votes, calls into question every Judge, many State Senators and even our members of Congress in swing districts.
.
The same lawmakers, who’s own legitimacy is now in doubt, passed laws against anyone actually viewing ballots in person to verify the votes.
.
At the end of the day, the legitimate powers of “elected” leaders like Gov. Sisolak wield come from legitimate elections governed the Constitution. After everything I’ve seen in the last month here in Nevada, we really don’t know if Sisolak really won in 2018. What I can say is the 2020 election system in Nevada was rigged. Was 2018 rigged too? We don’t trust the election system in Nevada anymore.
.
They got caught this time.
.
Republicans are now asking:
Who is the rightful Governor of Nevada?
Who is the rightful State Senator in District 6?
Who are the rightful members of Congress?
Who are the legit Judges in Clark County?